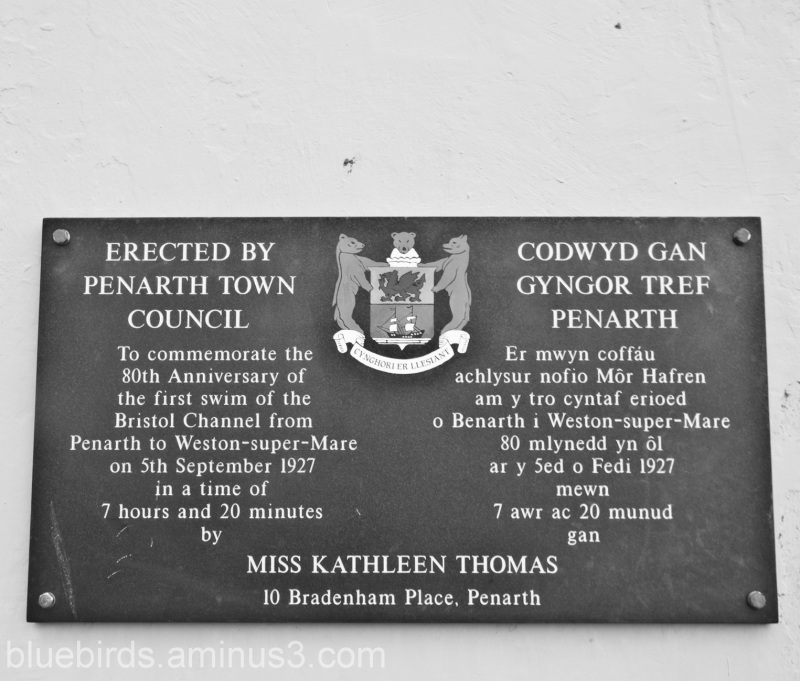 A seaside town now has a permanent reminder of one its pioneering daughters. At 21, Kathleen Thomas, from Penarth, became the first person to swim the Bristol Channel, on September 5, 1927. To mark the 80th anniversary in 2007, plaques were unveiled on Penarth Pier, near her starting point on the beach below, and at Weston-super-Mare, where her swim ended after seven hours and 20 minutes.

Kathleen died 20 years ago, but her children Graham Day, 68, Sabrina Steelsmith, 72, and Leucothea Simms, 62, were at the unveiling.

Graham, who now lives in Spain with his partner Ursula Cutts, said it was an emotional moment for the family.

He said: "The last time I was here was 20 years ago. We came to scatter my mother's ashes across the Bristol Channel in a boat. It was quite choppy that day, but suddenly the waves went calm and I poured the ashes over the side. Within two minutes, the waves started lapping again and a bell sounded from the shore. It was quite emotional."

He hoped the plaque would encourage people to remember her remarkable achievement and those of others.

Soon after swimming the Channel, Kathleen moved to London where she became a swimming teacher and met her husband Frederick Day.

The couple brought up their children in Kent, where Sabrina continues to live with her husband Ian.

She said: "I was getting very bored because I could see this lovely lady, Kathleen, but she wasn't making any effort to go into the sea.

"I didn't blame her, mind. I realised later they were smearing her with lard to keep the cold at bay."

Denise's father Gus Taylor, former chairman of the Welsh Amateur Swimming Association, had accompanied Kathleen in a boat during her swim.

Sabrina and Leucothea, who lives in Norfolk, remembered their mother telling them about her feat when they were young.

Grandmother-of-five Sabrina said: "When mother and father died, within a month of each other, my father said 'you should see that the plaque goes up for your mother. I really think she deserves it'."

Article from the South Wales Echo in 2007.

This is very touching. A huge moment in one small life and Kathleen is truly deserving of the memory. Strong posting, Philip.

@Ronnie 2¢: Thanks. I thought it a great story. I've seen this plaque at the Pier before but never thought much of it. The article posted was a great one I thought from a much maligned regional newspaper.

An impresive swim even today,there are big currents and very fast running tides in the Bristol channel.Thanks for sharing !!

Nice to see a real local hero has not been forgotten, in this age of "so called celebrity" worship.

Wow, living on the other side of this very treacherous stretch of water I can only marvel at the accomplishment, what an incredible achievement and both the words from the South Wales Echo and on the plaque honour her deservedly.

I am the second cousin, once removed, of Kathleen... It's amazing!

This is my great grandma. Never met her but she seems like a great person. I wish I could have met her.

kathleen is my 2nd cousin, I never knew her. We found out about while doing our family tree. Jo Scurry is my niece, she has also left a post. We have been to see the plaque, I took my daughter and my grandsons, it was a very poignant moment to know that this lady was a relative of ours. What a fantastic achievement. We are well proud of her x