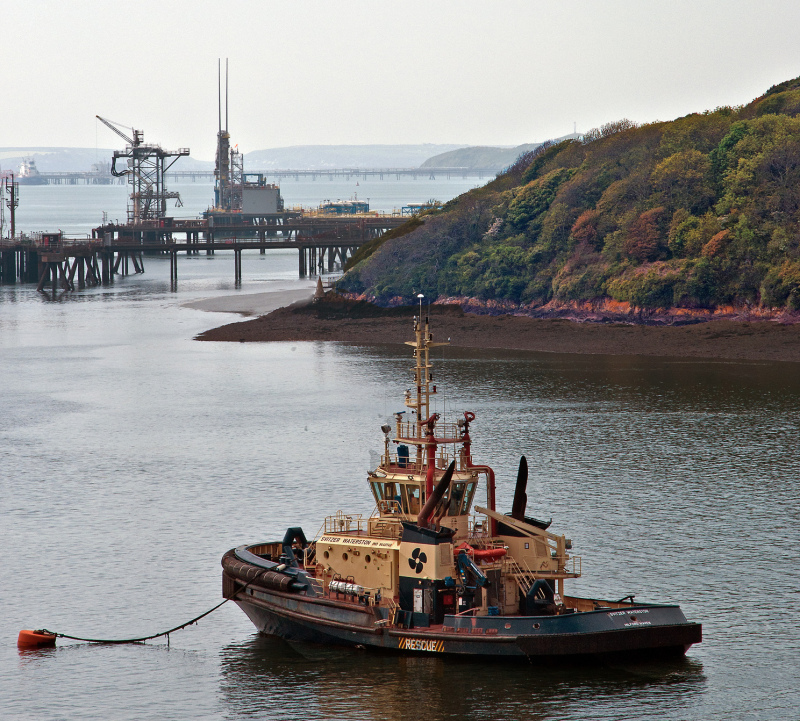 This is a tug based in the area. It was built in 2008 but has a checkered history as you will see from the report below:

The day after her delivery voyage to Milford Haven, the tug Svitzer Waterston was conducting propulsion trials with her new master onboard. Two other local tug masters were also onboard taking the opportunity to start familiarising themselves with the tug.

During the full speed straight runs required for the trials, numerous alarms sounded on the bridge. These were cancelled with some difficulty as a result of the lack of familiarity of those onboard with the bridge equipment.

After the trials, as the tug headed back towards the harbour, one of the familiarisation skippers took the con to get a feel of the controls. During this time the tug left the main channel to the west and grounded briefly in the area of Chapel Rocks.

Subsequent investigations established that the port drive unit was seriously damaged and required dry docking for repairs to be conducted.

A lovely capture of this interesting looking place. :-)

My cousin who´s Captain aboard a "Range Safety Boat" has had to pull the odd one of rocks.These Tugs seem to think they can go anywhere.

nice dof and interest at each level.